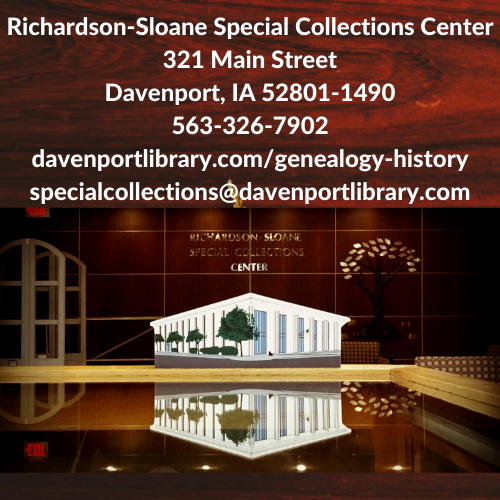 Hunting a shadow, the search for Black Hawk; an eye-witness account 973.56 Hun (not in SC)

Keokuk City Directory for 1856-57 containing a general directory of the citizens, with statistical and other useful local information; also a sketch of the Black Hawk war and history of the half breed tract (SC Fiche 977.799 Cle)

Outbreak and massacre by the Dakota Indians in Minnesota

Rock Island arsenal: in peace and in war. With maps and illus. Tillinghast, Benjamin Franklin. (SC 353.6 Til)

War of the Rebellion series

August Wentz Post No. 1 Grand Army of the Republic

Under the Guns (Annie Wittenmyer)

War of the Rebellion series

John Vale, Davenport resident for years, Congressional Medal of Honor winner in 1897 for actions in 1863 as Private in the Infantry

Founder Oliver Hudson Kelley lived for a time in our area

materials at IA State and U of I

Newspapers and clipping books from newspapers

It Was Salubrious SC 610 Mor

Banking in the local area

Latinas-Women who lived in Cook’s Point

State of Scott-promotion during 1940’s

Palimpsest article written by former resident of the home

Annual reports to the state

Oral histories of people who lived there as workers/orphans

Celestine - letter from her in LIRS accession

History of her on qcmemory

Family History on poster in Miscellaneous drawer of map case

Some interesting ones that might take a little more effort

Played all over Europe. Married a European woman and during the war led a sparse existence. Spiritualist. Ended career in Wisconsin.

U of I Women’s Archives

1876 responsible for publication of Proceedings of the Academy, worldwide circulation

Editor of publication in 1881