Comics for All Ages: Marbles 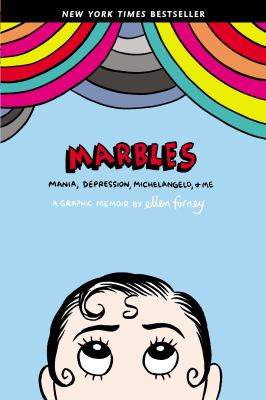 Marbles: Mania, Depression, Michelangelo, & Me tells the story of artist Ellen Forney’s battle with herself. Forney is an artist who had been seeing a therapist, but after her therapist saw some behavior that was concerning, she recommended Forney to a psychiatrist. There is where Forney’s voyage of self-discovery begins. With the help of her psychiatrist, Forney comes to realize that she has bipolar disorder and that the mood swings she is going through are not going to be easily managed by herself. Forney turns to the lives of other artists with mood disorders as she struggled to find a way to cope with her bipolar disorder without taking any medications. Forney’s graphic memoir is gripping, engaging, and darkly brooding in its telling of an artist’s journey of reliance on friends, family, doctors, art, and medication to figure out just what bipolar disorder means to her and how she will let it control her life.

Find Marbles at your library!