Comics for All Ages: Cowa 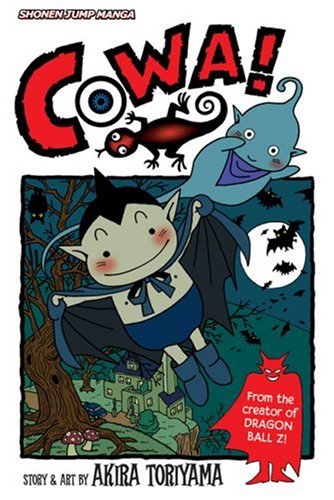 Cowa is series run from Shonen Jump Manga. This manga for younger readers talks about all of the shenanigans that Paifu, a vampire, and his friend José Rodriguez, a ghost, get into around town. Cowa is split into different chapters that each contained self-contained adventures the two went on. Paifu continuously thinks of schemes for he and José to go on. José reluctantly agrees to most, no matter whether they involve going to a scary unhaunted house where a human lives, stealing a watermelon, finding a monster in the woods, or visiting a witch’s house. How will José and Paifu get out of the scrapes they get in? Will José’s nervous farting five them away? Or will Paifu fail to think of an escape for the two?

Potential readers/appeal factors: individual chapter stories and not one continuous long novel, directions on how to read manga in the back, humor, friends, life adventures, monsters